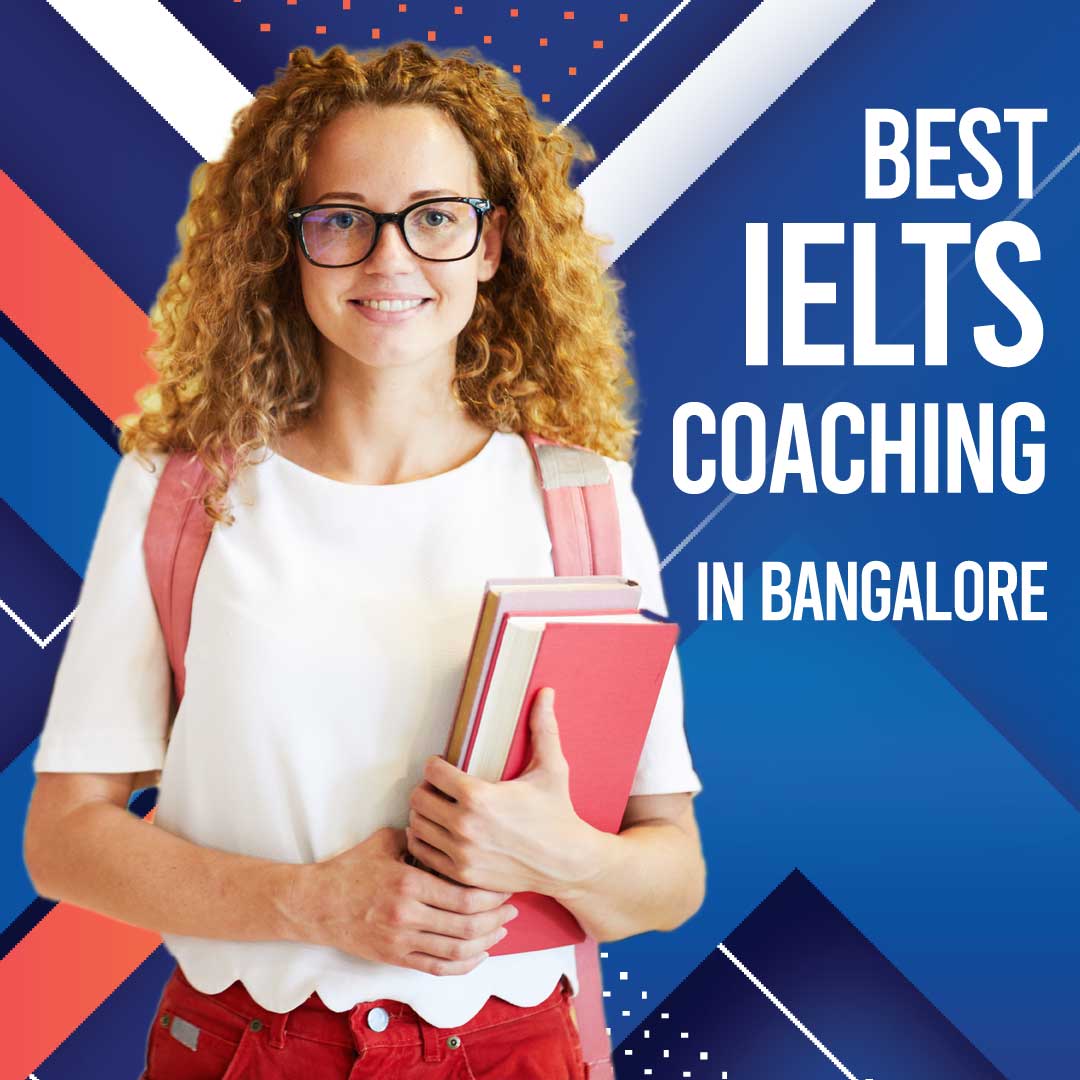 IELTS Bangalore evaluates the language capability of individuals who need to work or study where English is a dialect of correspondence. In a way, it can be called as a gateway to English speaking countries like USA, Canada, UK, Australia and New Zealand. The IELTS Bangalore exam comprises of a nine-band scale to recognize levels of capability, from band score 1 (non-user) to band score 9 (expert). The four areas where the IELTS check the compatibility of individuals are: Speaking, Listening, Writing and Reading. 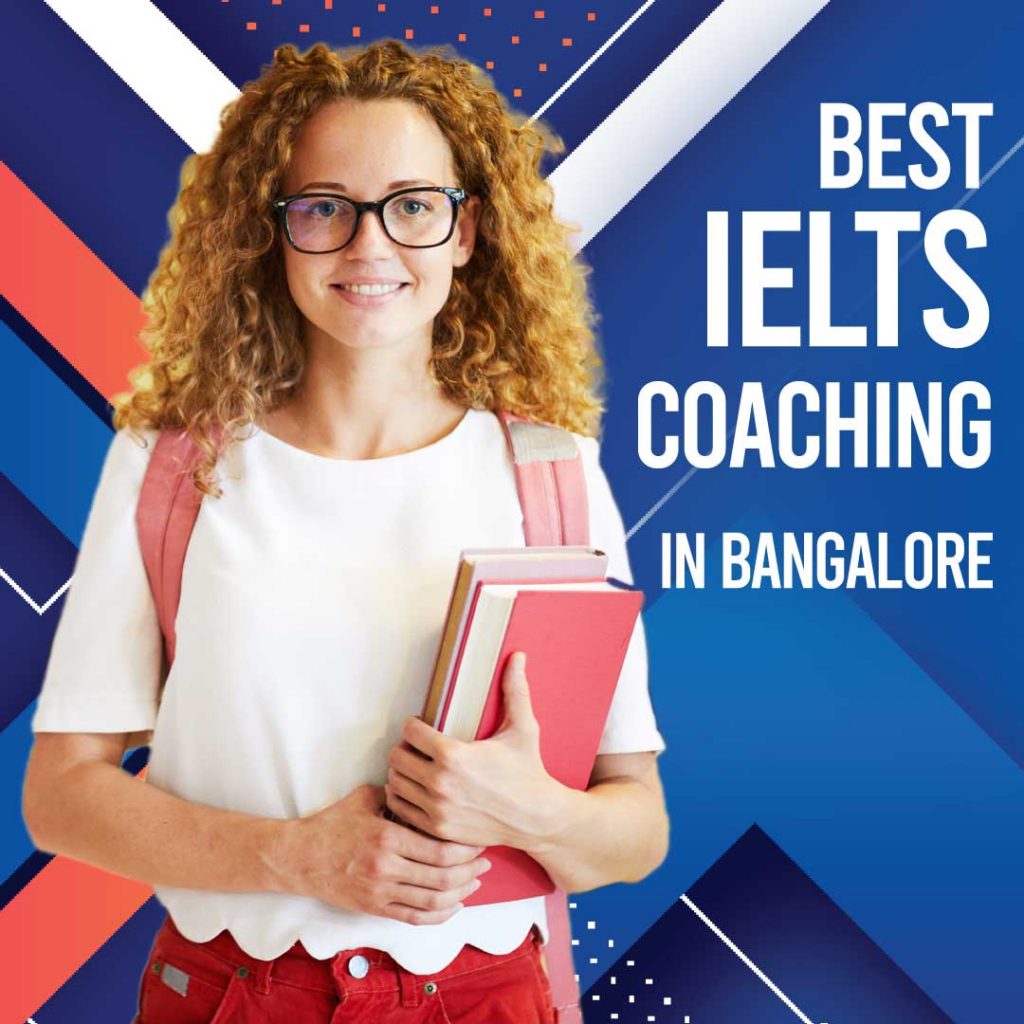 There is NO benchmark of minimum passing marks needed in the IELTS exam. An IELTS Test Report Form is provided to all the candidates who had taken up the test. The scores are allotted between band score of 1 to 9, where a score of 1 refers to non-user while a score 9 refers to expert. The colleges / universities / institutions across the English speaking countries lay down their own specific benchmark for the admission criteria. For example, most of the colleges and universities in Canada set a threshold of minimum overall band score of 6.5 and individual band score of 6.0 in each of the 4 sections (Listening, Reading, Writing & Speaking). For those who are not able to attend the test, a band score of ‘0’ is given. Additionally, Institutions do not consider a IELTS score, which is older than two years, as applicable.

There are 2 tasks to be completed in a IELTS Writing Test. The candidate needs to write at least 150 words to complete Task 1 and at least 250 words to complete Task 2. The total time allotted to complete both the Writing tasks is 60 minutes. Since Task 2 holds double the weight age as compared to Task 1 in terms of writing score, it is advisable to complete the Task 1 in 20 minutes and Task 2 in 40 minutes. The format of writing test for both IELTS Academic as well as General Training is different to some extent. Both these formats and the tips to write them efficiently are described below: 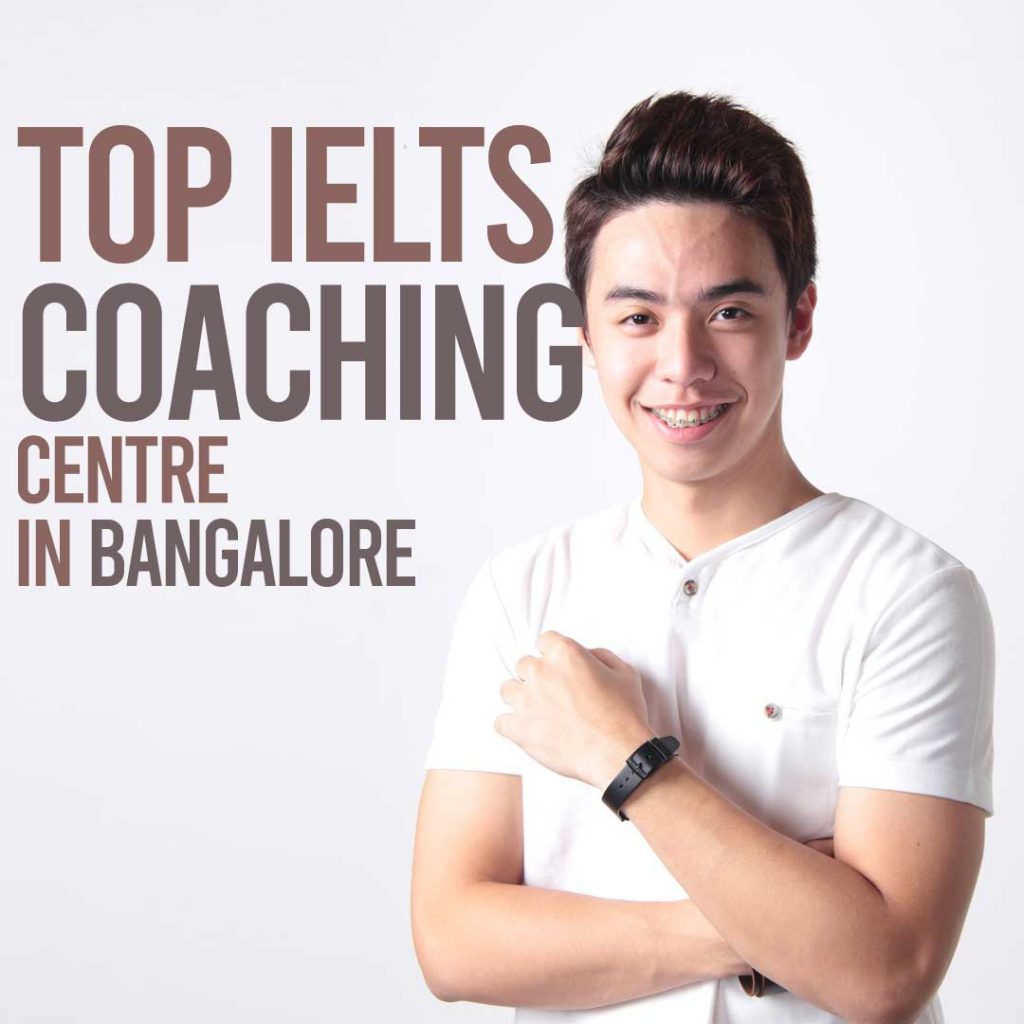 There are two tasks to be completed – Task 1 & Task 2. Replies to both these Tasks should be written in an academic, semi-formal or neutral style.

Task 1: In the first task, candidate is provided with a diagram, graph, chart or table and is asked to summarise and describe the information in his or her own words. Candidate could be asked to select and contrast information from two sets of data, explain the stages of a procedure, describe the physical attributes of an item and how it works. Task 1 has to be completed in a minimum of 150 words.

Task 2: In the second task, candidate is asked to write an essay in reply to a view point, statement, opinion, argument or some issue. The opinions raised are of generic interest related to academic field. They are appropriate for and easily understood by the candidates willing to pursue undergraduate or postgraduate studies or trying to get professional registration. The essay written should be formal in style. Task 2 has to be completed in a minimum of 250 words.

There are two tasks to be completed – Task 1 & Task 2. Topics provided in General Training module are of basic & general interest.

Task 1: In the first task, candidate is provided with a situation or a persisting problem. He or she has to write a letter, asking for information or demanding solution for the problem while describing the situation. The letter could be personal, semi-formal or formal in style. Task 1 has to be completed in a minimum of 150 words.

Task 2: In the second task, candidate is asked to write an essay in reply to a view point, statement, opinion, argument or a general issue. The essay can be more personal in response and not as formal in style as compared to Task 2 essay in Academic Writing. Task 2 has to be completed in a minimum of 250 words.

There are 3 sections in a IELTS Reading Test and the total length of the text lies in the range of 2,150-2,750 words. Each of the 3 sections contains one long text. Texts are genuine and are from magazines, journals, magazines, newspapers and other books. Texts vary from being explanatory and realistic to discursive and methodical. Generally, the texts also contain pictorial representation like diagrams, graphs or images. In case the text includes technical words, then a glossary is also given. 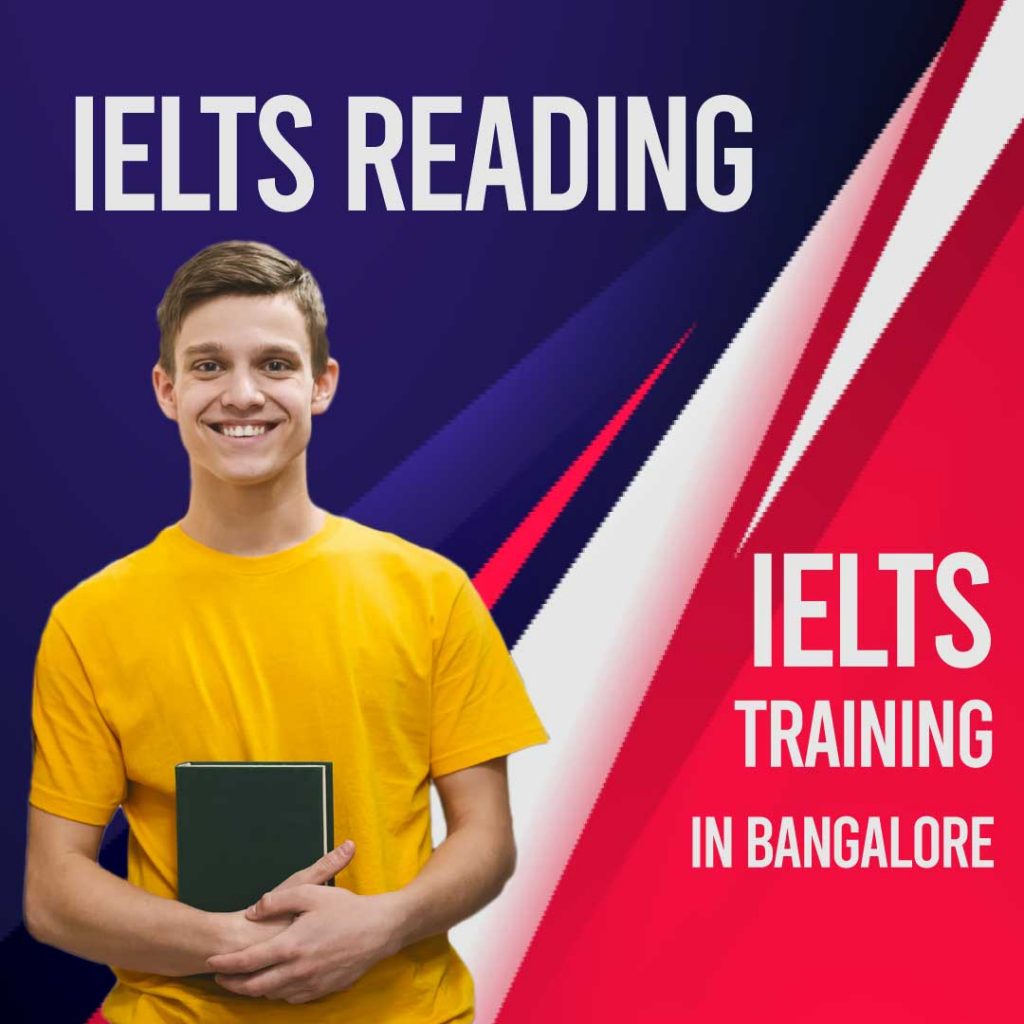 There are three sections

Section 1 includes six to eight small factual texts related by a common topic. This topic is relevant to day-to-day life events in an English society. For example, music concert advertisements.
Section 2 includes two short realistic texts with work-related matters being the objective. (For example, searching a suitable job, office rules and guidelines, workplace environment, human resource development and training)
Section 3 includes one longer and more intricate text on a topic of common interest. The topic chosen is authentic and taken from magazines, newspapers and various books including company handbooks and official documents.

For Academic IELTS, the section structure is similar as mentioned above for General Training IELTS with the major difference being that the texts are written for a non-specialist candidate and are more on academic and educational topics of common interest. Also, the texts are more suitable for candidates seeking professional registration or willing to pursue undergraduate or postgraduate courses in the English speaking countries.

Listening test pattern and tips to Score 8 band in IELTS

If you are looking for IELTS classes Bangalore Click here

This segment on preparation for IELTS  Listening will focus on the four components of the IELTS for test, namely – Listening, Reading, Speaking & Writing and brief about the pattern of each of these four components. The Listening, Reading and Writing tests are conducted on the same day while the Speaking test can be taken up to seven days after or before the other three tests. The order in which these tests are conducted is listening, reading and finally writing. There is no break between these three tests. The following segment highlights various aspects of Listening Test. 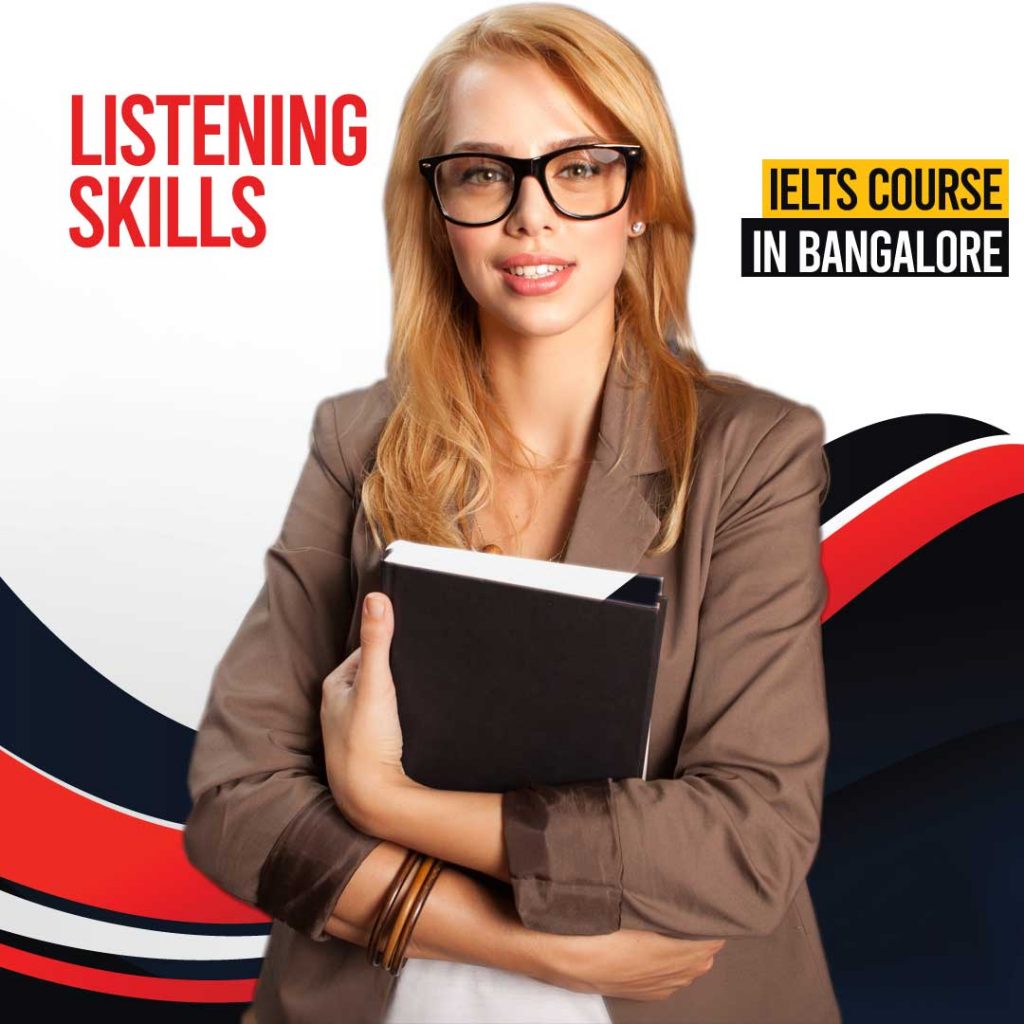 In the listening test, a pre-recorded tape is played and candidates are provided with a headphone to listen discussions / conversations / speeches by various speakers. Candidates must check the sound quality in their headphone before commencement of the test. In case of any malfunction, candidates should immediately contact the invigilators present at the test centre.

The time allotted in IELTS Classes Bangalore Listening Test is 30 minutes to answer the questions and additional 10 minutes to transfer the answers from question paper to the answer sheet. Hence the total time provided for completion of Listening test is 40 minutes.
Questions.

Test Parts
There are 4 sections in a Listening Test:

Section 1 entails a discussion in the form of a conversation among two people related to everyday social context (For Example, a conversation involving enquiry about booking of a concert).

Section 2 is a monologue or a speech given by a person, mostly to articulate his or her intellectual thoughts and sometimes to directly address other person or audience. The context of this monologue is related to daily life social context. (For Example, a speech about harmful effects of green house gases).

Section 3 is a discussion among two to four people laid down in an educational or training perspective (For Example, a university lecturer and a student having a conversation on a research project or a group of students sharing their experience on assignments they completed during winter break).

Section 4 is again a monologue or speech on an academic topic (For Example, a lecture on ancient artefacts).

Each of the above sections can be heard only once. To give objectivity to the task, a variety of voices and accents are used in all the sections.

Skills Assessed
A broad range of candidate’s skills are tested in the Listening test which includes:

The listening test carries a total of 40 marks for 40 questions, which implies that each correct answer gets 1 mark. The marks out of 40 are converted as per the IELTS scale to a 9 band score. Scores are awarded in whole as well as half bands (For example, 7 & 7.5). There is no negative marking for the wrong answers; hence the candidates can attempt all the questions.

Speaking test pattern and tips to score 8 band in IELTS

This segment on preparation for IELTS Coaching Bangalore for Speaking will focus on the four components of the IELTS Coaching Bangalore for Speaking test, namely – Listening, Reading, Speaking & Writing and brief about the pattern of each of these four components. The Listening, Reading and Writing tests are conducted on the same day while the Speaking test can be taken up to seven days after or before the other three tests. The order in which these tests are conducted is listening, reading and finally writing. There is no break between these three tests.

The following segment highlights various aspects of a IELTS Coaching for Speaking Test.

The Speaking Test takes 10 to 14 minutes to be conducted.

Task 1 – Introduction and Interview (4 to 5 minutes)

In the last task, the examiner asks additional questions which are related to the topic of Task 2. These questions provides an opportunity to the candidate to further discuss the conceptual issues and ideas with the examiner.

A broad range of candidate’s skills are tested in the Speaking test. In all the speaking tasks, a candidate is assessed for his or her

The candidate is assessed for his or her performance on each of the 2 tasks by recognised and certified IELTS examiners as per the IELTS Writing test assessment criteria (For Example, Lexical Resource, Fluency & Pronunciation, Task Achievement, Coherence and Cohesion, Grammatical Range and Precision). Scores are awarded in whole as well as half bands (For example, 7 & 7.5).