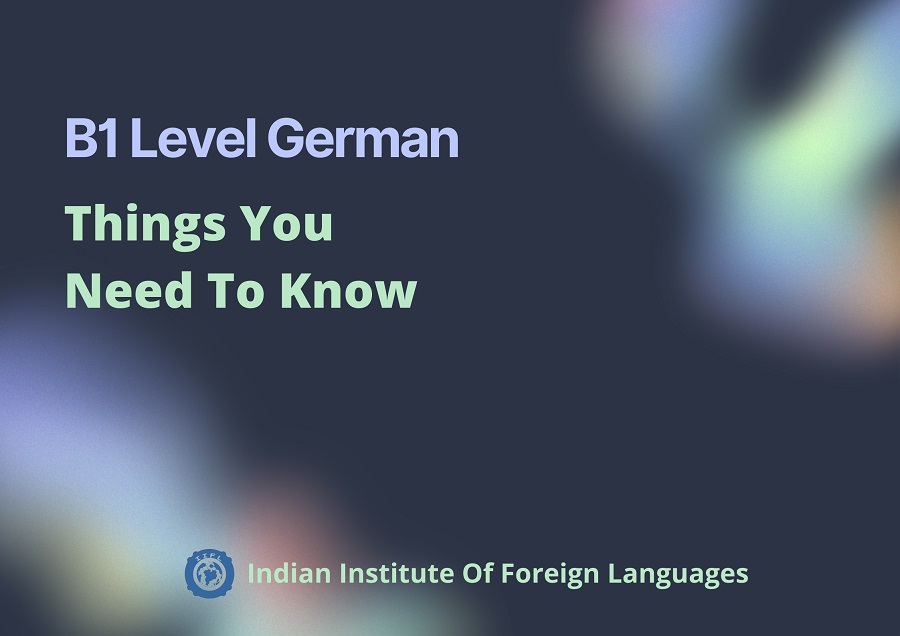 The B1 level is the third level in the Common European Framework of Reference (CEFR) for Languages. It is certainly a step beyond the A1 & A2 exams.

Passing the B1 level German exam means that you are on the intermediate level of your journey. Just like for the previous levels, the Indian Institute of Foreign Languages has divided the B1 level into 2 parts – B1.1 & B1.2, in order to make the candidate understand the level better, with as much knowledge as possible.

In this article, we will be discussing a lot of information pertaining to B1 level German (assuming candidates have a basic understanding of the first 2 barriers – A1 and A2 level German), which will help you ace it. So, let’s dig deep.

How difficult is B1 German? How much vocabulary is needed for B1 level German?

To put things into perspective, for the upper beginner A2 level German exam of the Goethe Institut, candidates should know about 1,300 of the most common words in the German language. If you are preparing for the Goethe Institut’s B1 exam, you must learn at least another thousand words. That’s a total of 2,400 words.

That’s quite a jump, and it can get a bit complex because you have plurals and gender (among other things) to remember.

Moreover, you will want to be on top of words that may not occur frequently but are important TO YOU (like talking about your hobbies, job, or other special topics in your life).

That being said, it’s totally up to you; how seriously you take it. If you studied well for the previous two levels, B1 level German shouldn’t be that hard.

How do I pass Goethe Institute’s B1 German level, and how do I come to enjoy and learn German more quickly?

This question gets asked a lot because not only does one want to clear the exam, but they also want to have fun in their learning journey.

As far as keeping a balance is concerned, just straining and writing out is not the most effective technique. Instead, one must make use of a key tool: spaced recall.

Space recall is a technique that leverages a memory phenomenon called the spacing effect, wherein one recalls certain information for several sessions by introducing time intervals between each session. It describes how our brains learn more effectively when we space out our learning over time.

But what should we recall – just individual words? NO!

Apart from individual words, learn chunks of a language whenever you can. In fact, prioritize it over the isolated items of vocab.

Chunks could be any short-ish combination of words that the native speaker effortlessly deploys as if one word. It may be a shorter phrase: “Schön Sie kennenzulernen” – nice to meet you, or it could be a full phrase: “Ich begleite dich ein Stück” – I will walk you a bit.

Chunks can also be idiomatic expressions that, when translated literally, may not make much sense. For instance, the expression: “ich bin schon ziemlich blau” translates to “I’m already pretty blue already,” meaning – “I’m already quite drunk.”

The Importance of Chunks

When you learn a term in context, you will find that word is easier to remember. You will be sure you are using it right. That’s obviously better than struggling to go word-for-word from English; it’s a risky game because the German language expresses things differently. Understanding is one thing but sounding like a native is different.

Learning chunks helps you understand the general style of the language as well as the wider grammar. One of the reasons why we understand and speak our native language so quickly is because natives process language in chunks. Focus on chunks, and not only will you be able to speak more accurately and naturally, but also more rapidly.

What grammar lesson must one know/learn to pass the B1 German test?

Getting good at B1 level German involves being able to talk about a variety of topics at a deeper, more sophisticated level. When it comes to grammar, here’s an idea of what you can expect (or what’s expected from you in the test) at this intermediate level.

Phrases become more complex in German, and the position of the verb often becomes very different from English.

For instance, you will have to focus on the modal verbs – auxiliary verbs used with other verbs that indicate ability, likelihood, obligation, or permission (“mögen”, “können”, “wollen” and so on).

You must also practice building out a phrase to explain consequences or causation (clauses with “wegen” – because of) and conjunctions such as “obwohl” – although and “deshal” – therefore.

Then comes the genitive case, often used to express a relationship of possession. For instance, “das Haus meines Bruders” – my brother’s house. You may have come across the genitive cases already, but at this level, you will be tackling it head-on.

Then there’s also the German imperfect tense (the Präteritum). In the spoken language, it’s commonly used for a small number of verbs to refer to the past. Otherwise, its use is mostly in the written language.

The Konjunktiv II can also express an element of conditionality. Something could (or would) happen if something were to be the case: John könnte eine Weltreise machen, wenn er viel Geld hätte – John could travel the world if he had a lot of money.

Here’s something that will probably be totally new as you reach the intermediate level – the “past perfect” (or “pluperfect”) tense. This tense enables you to talk about “the past in the past.” For example: “Sie war sehr müde, denn sie hatte den ganzen Tage gearbeitet” – She was very tired, because she HAD WORKED all day.

No matter how tough or lengthy it may look, remember, it’s not without end. The key is to take things slowly and reinforce what you have already done as you go.

How to find the ideal online German language course?