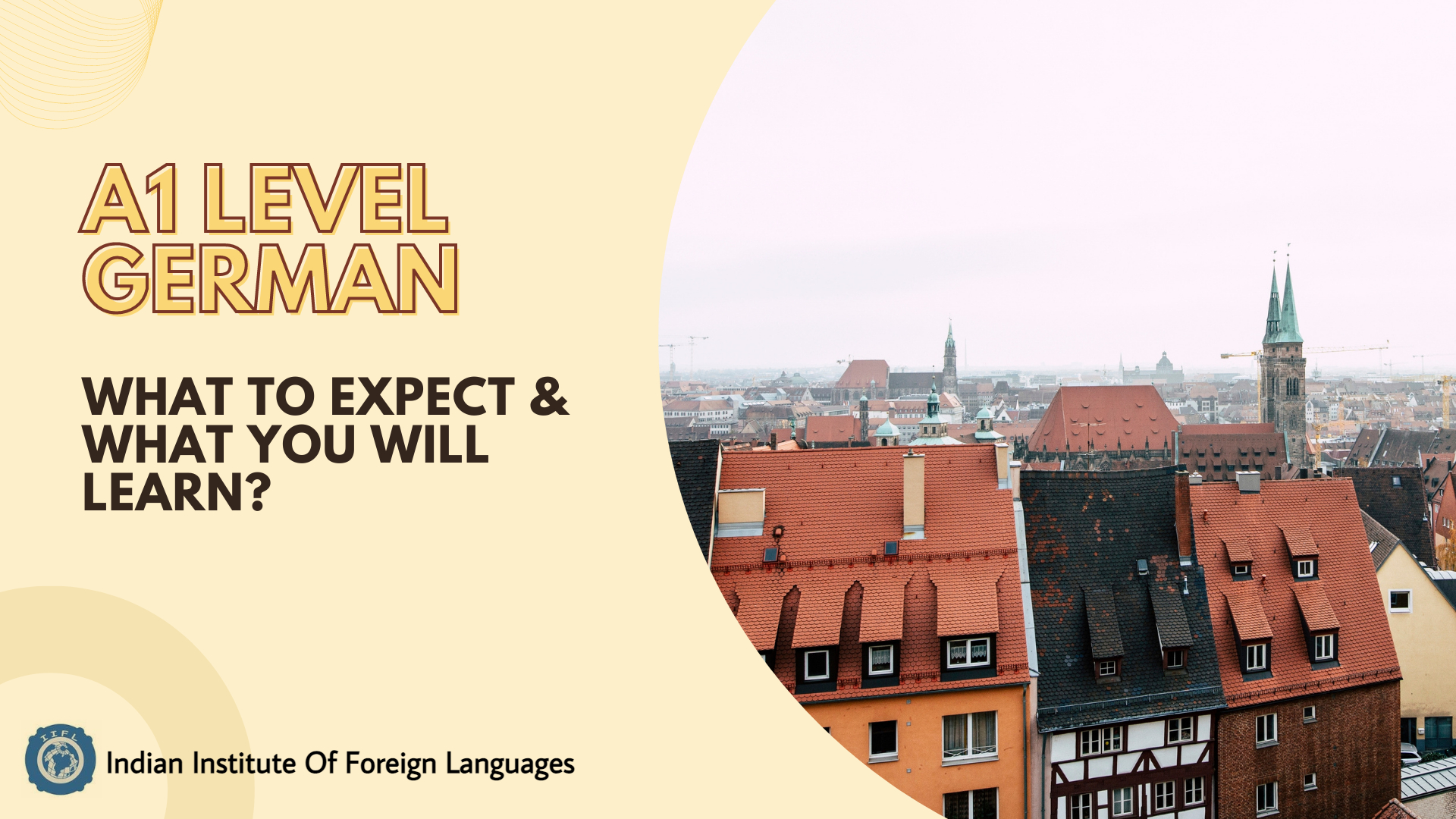 A1 level German is considered as the elementary use of the language. It contains basic grammar and vocabulary meant for simple conversations. In the Indian Institute of Foreign Language (IIFLS), the A1 level is further divided into A1.1 & A1.2 which helps students gain a thorough understanding of the basics as they embark on their language learning journey.

According to the Goethe Institute, if you learn A1 level German, here are the things you will be able to do:

Simply put, with A1, you are at the level of “Hello, my name is A. I am from B. I am sorry, could you say it again, please, and speak a bit slower?

As for the course itself, let’s take a look at some of the aspects of A1 level German which you will be using in your day-to-day life.

Much like the English alphabet, German also has 26 standard letters.However, German also has 4 more extra letters (Ä, Ö, Ü & ß). Ä, Ö & Ü are called “umlauts” and sound very similar to A, O & U, however they are formed in the front of your mouth and have a sharper sound. The letter „β“ is called “eszett” or “scharfes S”; it is basically the equivalent of a double S.

Some unique Characteristics of the German Alphabet:

Note: In some cases the „g“ at the end of a word sounds like a „ch“, especially if the word ends with „ig“.

You don’t have to learn all German numbers (Deutsche Zählen) from 1 – 999,999 by heart. If you see the pattern, you will be able to tell the series of numbers as you move forward.

German is a more phonetically-compatible language than English. This means that the German language has consistent sounds for any given spelling. It is important that you know how the German Pronunciation works (For instance, the German ei — always sounds EYE, whereas German ie — always has the ee sound.) In German, exceptions are usually made for foreign words from English, French or other languages

Any student looking to learn German, must focus on the sounds associated with some spelling as soon as possible.

When you travel to any German-speaking nation, you will find that the most frequently used phrases and words are the common German greetings (Grüße). These words and phrases will quickly become a habit because you use them every day with everyone you come across.

In most German-speaking countries it’s considered good manners to greet everyone whether you are speaking to a waiter, clerk, or just bumping into someone on the street. As one would expect, you should use a polite greeting at all times. We will take a look at 2 of the most common types of greetings taught in A1 level German: Saying hello and bye-bye!

Some common ways to greet someone in German are:

Note: Nouns have gender in German. Just to be clear, there is no difference between Gute and Guten in terms of meaning. The reason you use Guten with Morgen, Tag and Abend is that these nouns are masculine. On the other hand, you use Gute with Nacht because this noun is feminine.

There are many ways to say goodbye as well:

A great first sentence to learn in German. It’s a logical way to start most conversations.

This little phrase denotes your place of birth.

Note: Aus is also one of those tricky prepositions that can have different meanings depending on the context. So, don’t be alarmed if it gets translated as “out,” “off” or something else in other sentences.

Keep in mind that the order in German numbers is different compared to English. For example, Twenty-six is translated as sechs und zwanzig (“six and twenty”).

Not only is this an impressive fact about you, but also a great way to get permission to practice some German on someone. Putting it out there from the get-go covers a lot of your grammatical sins. This is usually the equivalent of “studying,” as it’s also used when reviewing old material.

How about a simple yet versatile sentence that can be used over and over?

Note: Mag is actually pronounced “mahk,” as the “g” takes on a “k” sound when placed at the end of a word.

Apart from these, A1 level German will teach you many other things such as basic German phrases, common German verbs, parts of the body etc.

Learn Any Foreign Language Without Fear